To the ghost town

Mountain bikes are ideal. If you’re a mountain biker, even the way in will be faster than walking, and the way out will be MUCH faster. For a non-mountain biker, the way in will be about the same as walking, but the way out will be a bit faster, and you’ll definitely appreciate the downhill sections on the way out! You do have to carry your bike over the log across the stream, but it’s not bad. There’s sections of push-a-bike and it’s not all nice forest road, but a decent chunk is.

The ghost town of Monte Cristo is pretty neat!

Continue through the town and up the Glacier Basin trail. It’s a great trail for most of the way.

Halfway up, you’ll start to get a view of the spire! But frustratingly, the spire is the opposite direction of where your trail goes. The trail circles around the big mound to the basin. I saw descent tracks from the snowy saddle heading down this rocky side, but we stayed on the official trail. 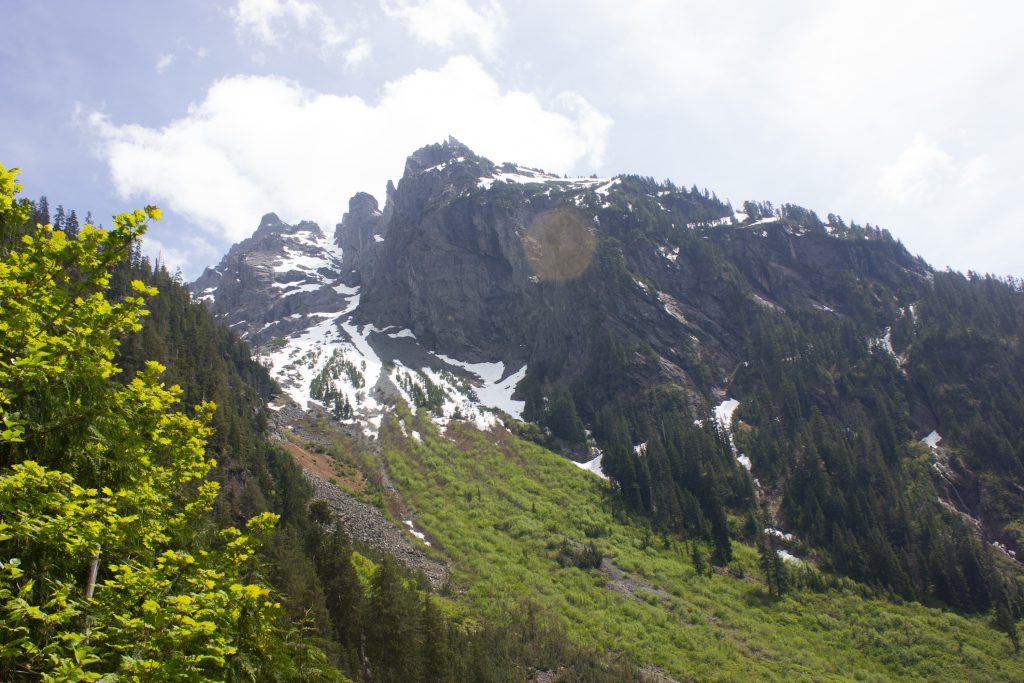 From here, the trail starts to get steeper and tougher, but still well maintained.

Eventually you pop out to the absolutely gorgeous basin. Follow the trail low near the creek and around the ridge. Note that there is a good size campsite at the beginning of this basin, but it would be further from the spire.

We found a flat-ish spot on the snow near the ridge with a great view of the spire. Very few people come up here, so there won’t be competition for spots. We found running water nearby that was above any of the old mines. Beware that the mines here contaminated a lot of the water sources.

Your first challenge is getting up the snow gully, which is 45 degrees at its steepest, and it’s steep for probably around 600 ft of distance. 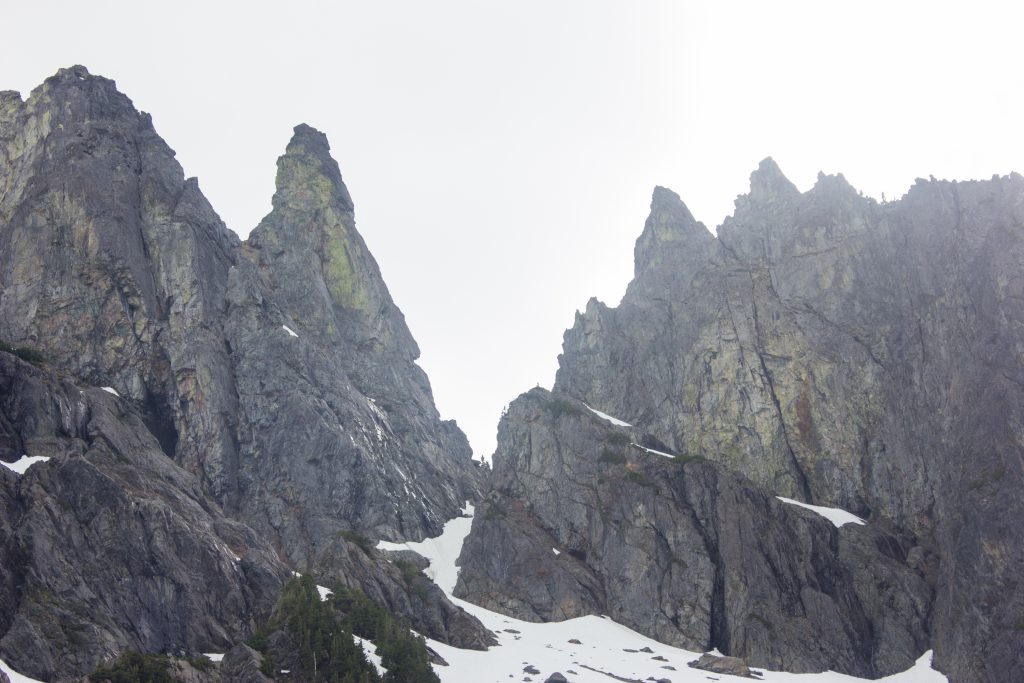 At the top, you exit the snow onto some rock and get to a saddle, where you’ll continue around the right of the peak to the base of the climb at another saddle.

The only piece of gear I really wanted was a #2 camalot. Didn’t have it. Fun uncrowded route, although that was before Select 2. Its like the Tooth with a way more interesting approach\views. Source

Climb up the nice sloping flat rock, then traverse left and then down climb loose/sketchy rock and then walk to flatter ground left and up and belay from a rock.

The down climbing part is pretty sketchy and not fun. 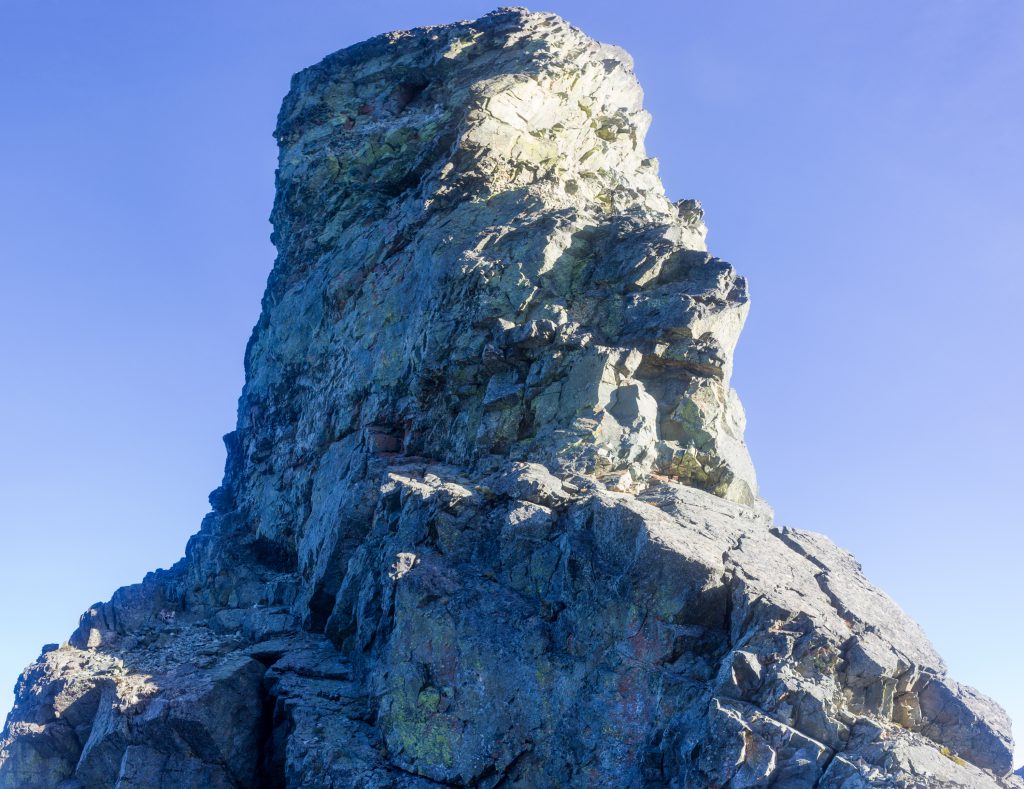 One description mentions traversing out to an alcove where they found an old pin and ended the 2nd pitch there, but we followed other descriptions.

We walked a bit further left and then up and right on the easiest seeming blocky path, which heads basically straight up/right. The only downside is that there’s lots of loose rock, big pieces that would be worrisome to break off onto the belayer. It ends at a boulder with slings.

Pitch 3 is short and sweet, possibly the best climbing of the whole route (which isn’t saying much). There’s a somewhat obvious path up the left side, then it continues straight up. Pro might of been a bit sparse. There’s some hunting for hand holds.

Rappel the route. There’s three pitons at the summit with webbing and rings to rap off of for a short rappel getting you to the webbing-slung rock at the top of P2. Then rap P2 back down to the top of P1. Finally, make one final rap down into the gully.

The scary part starts! Walk back down the steep snow slope :/ You can step down it all cautiously, but it takes a long time.

This climb was sustained and tough! Full body workout! Tons of stemming, good amount of hand jams (definitely crack gloves needed), overall quite good (but difficult) climbing. This was probably our favorite climb in Sedona, lots of quality climbing, pretty good approach, good rappels. Only downside is that you have to bring two ropes and…