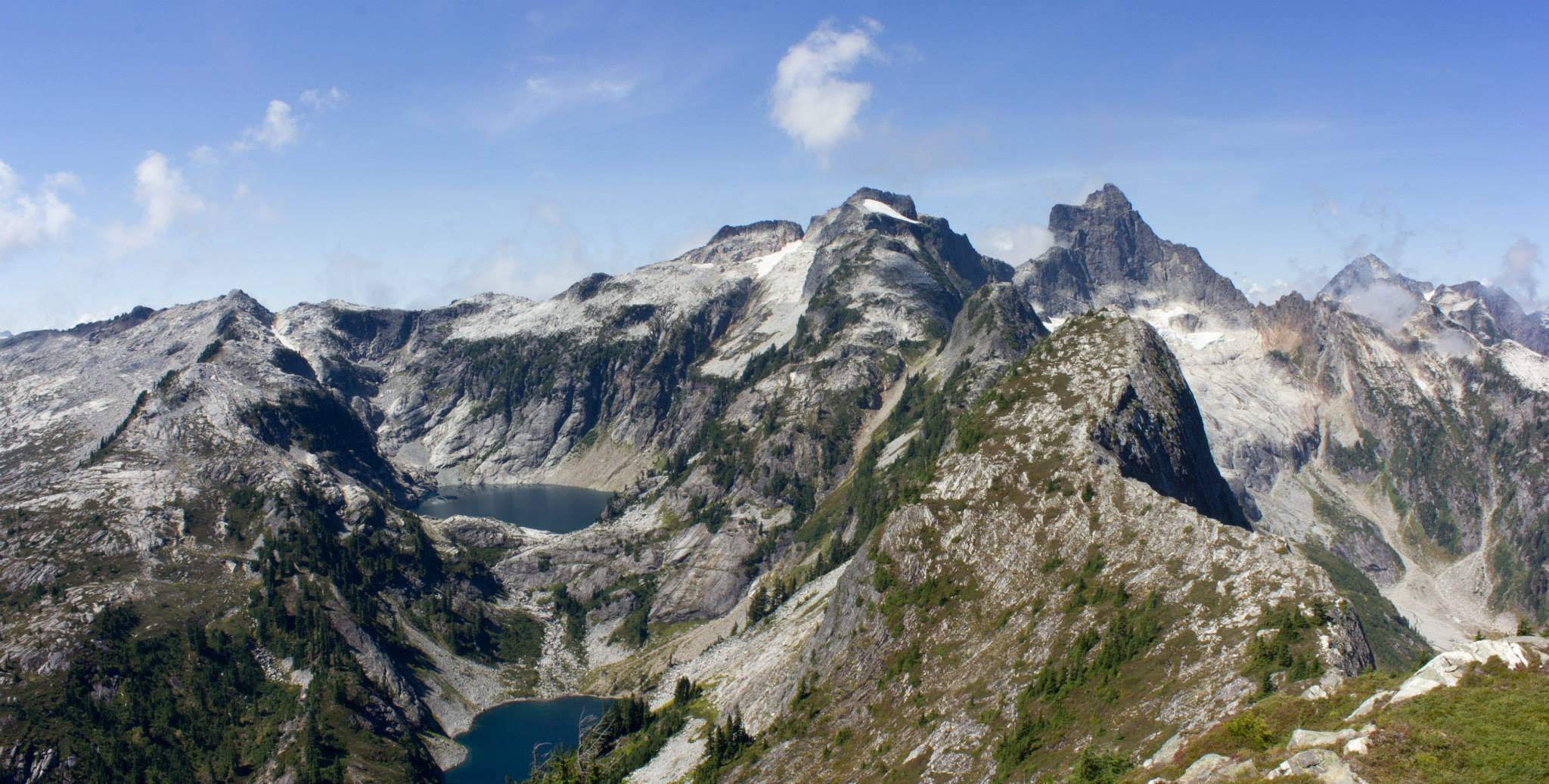 Take the Thornton Lakes Trail for about 5 miles (see the Getting There section on the main page) to the outlet of the lower lake. Follow the boot path around the west side of the lower lake, cross the stream between it and the middle lake, and continue on to the slopes immediately above the northeast side of the middle lake. Find a thin climber’s path up through the steep heather on the right side of the ravine/gully that leads up from the northwest side of the middle lake. (Note: this climber’s path can actually be seen in satellite photos. See here.) Find a nice camp at the saddle (on the left as you make the final steps to the saddle proper). It is about 1.5 miles from the lower lake outlet to this saddle but it will feel like 3 miles. The faint trail up to the saddle traverses steep heather. This heather would be hazardous if wet. Plan appropriately. Crampons? Unless global warming continues, there is a small but permanent snowpatch right there at the camp. To obtain liquid water, you can descend the snowfield (icy in late season) north of the saddle to its base. A small stream emanates from the snowfield. This stream is left of the prominent hump at the base of the snowfield.

From the saddle, proceed down the snowfield for a couple of hundred vertical feet. Pass left of the hump at the base of the snowfield (note there is also a mediocre bivy on this hump if the saddle camp is already taken). In early season, get off the initial snowfield by way of a steep snow arete downclimb for about 50 feet. Later in season, it may be possible to downclimb in the moat. Traverse NNW across snow, ice, or slabs (depending on season) aiming for the prominent 6,080+ ft notch in the Northeast Ridge.

Getting to the ridge

At the other end of the glacial slabs is a diagonal cut leading up and right. This cut has one small class 4 step at its base but otherwise allows access to angled slabs that lead up to the notch. If snowcovered, these slabs could be a little more exposed. One could bear directly toward the notch higher up but this appears to require harder climbing. And why make it harder when you don’t have to. 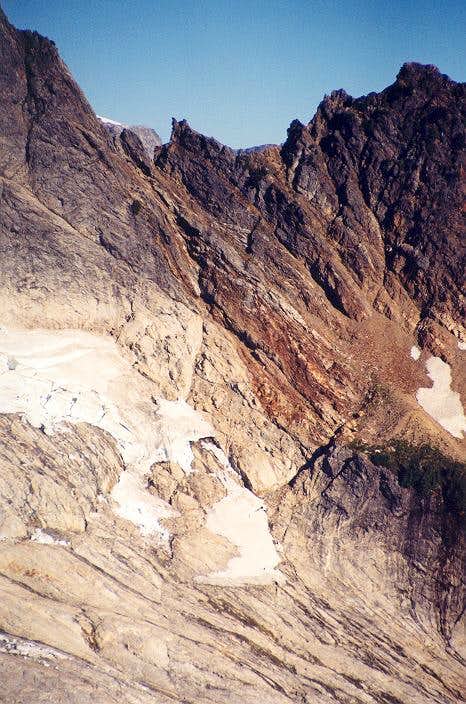 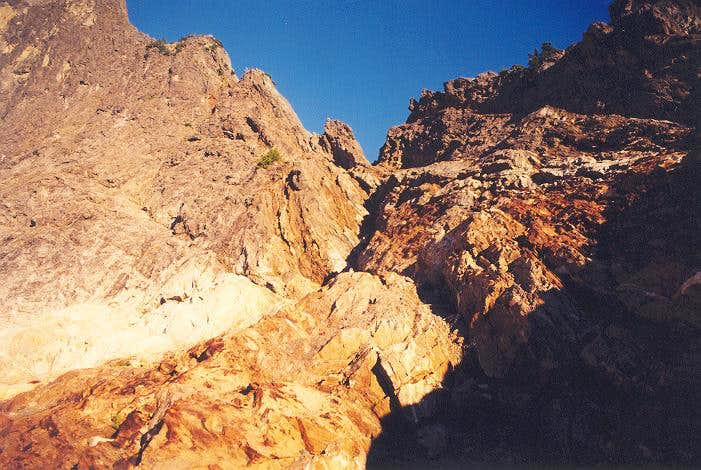 I took the sharp end for the simul-climb section of the ridge and began to ascend. Right away it was apparent that rope drag and placing adequate protection was going to be an issue. I kept finding myself yarding hard on the rope to make forward progress. In addition, the terrain is mostly class 4 with some low 5. This kind of grading can be easy to handle mentally without much protection so long as its not exposed. However, the NE Ridge is highly exposed and airy. A fall would have dire consequences especially since I was only placing 3-4 pieces of gear per 60 meters! That being said, the climbing was fun, although intimidating. We traveled over the first steep rise to a large flatter section of the ridge with 2 bivy sites. Beyond there was class 3/4 terrain that led to another more sheer and menacing rise. This second rise was the scariest section of the climb. The rock seemed especially brittle and I found myself pondering if something I grabbed would rip off; not to mention I had no confidence in any of the gear I placed. There was a rap station about 3/4 of the way up. It was composed a a rusted piton is a in-secure looking crack backed up by a loose, wiggling horn. YIKES! we made a mental note to use an alternative anchor. Beyond the scary rise is the start of the knife edge which is gained by climbing a narrow, unprotected face for about 20 feet. I led along the knife edge until reaching the base of the second gendarme before belaying Damien in.

It was about 12:30pm at this point and we were probably 2/3 or a bit less of the way through the route. Ahead of us laid the cruxy, leaning 5.7 crack and steeper climbing that was reported to have scarce protection per the beta. It would take about 4 hours to reach the summit considering we were pitching almost everything out due to the lack of protection. This put us on the descent at about 5:00pm with only four hours of daylight to complete 15 or more raps. Damien and I could not justify this risk and in the end made the decision to retreat. I’m learning a lot about retreat this month it turns out. Every time its frustrating and often depressing for me, but I have never regretted it. Live to climb another day.

Getting down could take you longer than going up. It took us roughly 45 minutes longer to rappel the ridge than to get up (5 hours, 15 minutes versus 4 hours, 30 minutes) and we were doing mostly double rope rappels.

Warning: the following is description is for those possessing two 60m ropes with which to rap. I make no commentary about parties with only one rope other than you will probably find yourself rappelling to intermediate rap stations of dubious quality. Certainly some of them may be on the side of a rock face. Also, I may be forgetting a rappel. A lot of them looked and felt the same.

From the aforementioned rappel station on the uppermost Northeast Ridge, Rap#1 descends to another rap anchor above the steep buttress that looms above the Great Notch. Note that hardcore climbers can downclimb this first rappel. The terrain is mostly very steep heather and rocks. Rap#2 descends into the Great Notch. It requires two ropes. The last 40 feet is free-hanging.

Rap#3 goes down from the notch to the top of the crux part of the climb. Rap#4 descends past the crux to the uphill end of the knife-edge traverse. It is not possible to rappel the knife edge. Simulclimb or belay back across the knife. descends.

Rap#5 descends the second step in the ridge (the step with the steep heather off to the right). A little downclimbing down and to the right gets one back to the top of the small first step (the one with the shallow gully on the southeast side). Rap#6 goes down this small step to where the bivy sites are located. Rap#7 is a long one and leads down to the high side of the small gendarme at the 6,080+ ft notch. Rap#8 is a short rap (single ropes are fine) to the main notch. You can downclimb along the red slabs back to the diagonal cut and finally back to the gray slabs below the glacier.

Just climbed the route again (for the fourth time) 12-14 August 2011. A single 60m rope is long enough for each rappel, and the rappel stations are sturdy with rings, quicklinks, or carabiners installed. If you’re climbing mid-summer, bring extra cord to replace any worn tat, but you should be fine with a 60m rope.